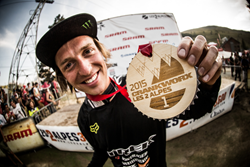 Monster Energys Brett Rheeder is one contest away from winning the Triple Crown of Slopestyle, which is a new title that was set as the ultimate challenge to see if one rider could take home all three Crankworx Slopestyle victories in a single year to establish the perfect season.

Rheeder’s first run raised the bar to a level beyond what the international line up of riders could touch, scoring a 93.25, four points more than his nemesis and fellow Canadian friend Brandon Semenuk, earning him enough to take home the win.

Hailing from Ontario, Rheeder had to sit and watch as Semenuk dropped in as the only rider that could bump him off the top spot, but a mistake on his final run would hand Rheeder the win.

“I dont know what to say. Im so happy its crazy! I am still shaking; this all just seems so surreal. He just stopped for whatever reason, and that left me in first, said Rheeder. I missed a couple of things and had to improvise, but somehow it all just worked out.

Rheeder was shocked as he crossed the line after his victory lap being hailed as the new ‘Golden Boy’ of slopestyle.

The course here in France featured 12 trickable features, including a skinny wooden roll in, an iconic whale tale and a freeride MTB style road gap for riders to throw down on.

Rheeders run was packed with style and progressive tricks on this wild course: a flat drop backflip off of the roll in, backflip tail-whip into the first box to truck driver out, opposite 450 on the hip, front flip bar spin on the first trick jump, opposite tail-whip on the road gap, his signature corked 720 on the second trick jump, backflip bar spin on the spine, tail whip into the whale tail and truck driver out, backflip bar spin to tuck no hander, and finally a backflip opposite tail-whip on the step down in front of a packed crowed of MTB fans.

The Crankworx World Tour resumes in its birthplace of Whistler, Canada on August 15th where Rheeder will attempt to secure the crowning glory, a potential $ 75,000 and become the first athlete to win the Triple Crown of Slopestyle.

For more on Rheeder visit Monster Energy at http://www.monsterenergy.com.

Based in Corona, California, Monster Energy is the leading marketer and distributor of energy drinks and alternative beverages. Refusing to acknowledge the traditional, Monster Energy supports the scene and sport. Whether motocross, off-road, NASCAR, MMA, BMX, surf, snowboard, ski, skateboard, or the rock and roll lifestyle, Monster Energy is a brand that believes in authenticity and the core of what its sports, athletes and musicians represent. More than a drink, its the way of life lived by athletes, sports, bands, believers and fans. See more about Monster Energy including all of its drinks at http://www.monsterenergy.com.